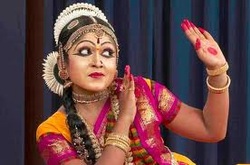 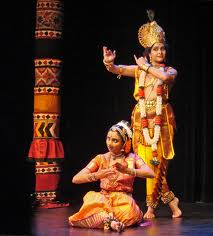 Kuchipudi (తెలుగు : కూచిపూడి) (pronounced as 'Koochipoodi') is a Classical Indian dance form from Andhra Pradesh, India. It is also popular all over South India. Kuchipudi is the name of a village in the Divi Taluka of Krishna district that borders the Bay of Bengal and with residentBrahmins practicing this traditional dance form, it acquired the present name.

The performance usually begins with some stage rites, after which each of the character comes on to the stage and introduces him/herself with a daru (a small composition of both song and dance) to introduce the identity, set the mood, of the character in the drama. The drama then begins. The dance is accompanied by song which is typically Carnatic music. The singer is accompanied by mridangam (a classical South Indian percussion instrument), violin, flute and the tambura (a drone instrument with strings which are plucked). Ornaments worn by the artists are generally made of a light weight wood called Boorugu.

[edit]StyleAparna Krovvidi, a Kuchipudi dancer from Rajahmundry and India ICAI'National Level First Ranker in CA-CPT, ICWAI Foundation'Kuchipudi dancers are quicksilver and scintillating, rounded and fleet-footed. Performed to classical Carnatic music, it shares many common elements with Bharatanatyam. In its solo exposition Kuchipudi numbers include 'jatiswaram' and 'tillana' whereas in nritya it has several lyrical compositions reflecting the desire of a devotee to merge with God -

Beyond the stylistic differences of Kuchipudi and Bharatanatyam steps, there are certain types of dances that are unique to Kuchipudi. Specifically there is the Tarangam of Kuchipudi which is unique in that the dancer must dance upon a brass plate, placing the feet upon the raised edges. The dancer moves the plate with much balance as the indiviudal is traditionally dancing on the plate with two diyas (small oil-burning candles) in his or her hands while balancing a "kundi" (small vessel) containing water on their head. At the end of the dance, typically, the dancer extinguishes the candles and washes his or her hands with the water from the vessel.

There are also subtle differences in the costumes of both types of dances. Generally, Bharatanatyam dresses have three fans of differing heights that form the illusion of the spreading pleats of a sari. However, in Kuchipudi there is typically only one fan which tends to be longer than the longest of the three fans present on Bharatanatyam dresses.

Kuchipudi, a blend of music and abhinaya, is Andhra Pradesh's unique contribution to dance.

The dance styles in the State are based on the standard treatises, viz. Abhinaya Darpana and Bharatarnava of Nandikeshwara, which is sub-divided into Nattuva Mala and Natya Mala. Nattuva Mala is of two types - the Puja dance performed on the Balipitha in the temple and the Kalika dance performed in a Kalyana mandapam.Nattuva Mala is of three kinds, viz. Ritual dance for gods, Kalika dance for intellectuals and Bhagavatam for common place.The Natya Mala is a dance-drama performed by a troupe, consisting only of men, who play feminine roles.

[edit]Movements and MusicV Anjana Devi, a Kuchipudi dancer performing atRavindra BharathiHyderabadThe songs in Kuchipudi are mimed with alluring expressions, swift looks and fleeting emotions evoking the rasa. In Tarangam at times she places a pot full of water on her head and dances on the brass plate. The song accompanying this number is from the well known Krishna Leela Tarangini, a text which recounts the life and events of Lord Krishna

In expressional numbers a dancer sometimes chooses to enact the role of Satyabhama, the proud and self-assured queen of Lord Krishna, from the dance-drama Bhama Kalapam. She goes through various stages of love. When in separation from Lord Krishna, she recalls the happy days of union and pines for him. At last they are reunited when she sends him a letter.

One more number from the Kuchipudi repertoire that deserves mention is Krishna Shabdam, in which a milkmaid invites Krishna for a rendezvous in myriads of ways giving full scope for the dancer to display the charms of a woman

Over 2,800 Kuchipudi dancers, including 200-plus natyagurus created a Guinness Book of World record on December 26, 2010 performing Hindolam Thillana at the GMC Balayogi Stadium inHyderabad.

The spectacular show performed by dancers from 15 countries and every state was staged in praise of Kuchipudi choreographer Siddhendhra Yogi.

The 11 Minutes Programme was staged as part of the concluding ceremony of the three-day 2nd International Kuchipudi Dance Convention.

Kuchipudi Dance Performers from around the worldRapturous applause filled the venue as the programme came to an end and a representative of the Guinness Book of World Records announced that she was speechless with the magnitude of the programme.

Mr Kiran Kumar Reddy who had announced an assistance of 25 lakh Rupees on the Inaugural Day, handed over a cheque for the amount to the Union minister of state for Human Resources Development, Smt. Daggubati Purandeswari.