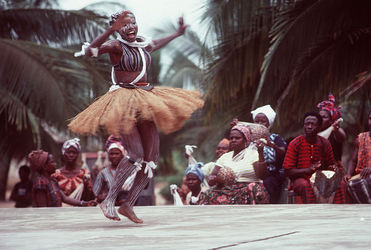 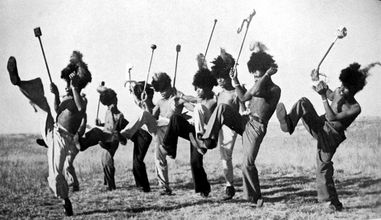 There are many forms of African dances, some of which are detailed below:


The stamping dance known as Ndlamu, is done by the Nguni group of tribes, each in their own fashion. It is a secular dance performed by young men in single or double line. Different tempos, manners of stamping the ground, ending the dance, and ways of holding their dance sticks are used by each tribe: the Itlangwini from Southern Natal; the Baca from the Eastern Cape Province; the Mpondo and Mpondomisi from further south; and perhaps best known, the Zulu.[23]

Adumu, Maasai traditional dance.Adumu is a Maasai dance which is performed during Eunoto, the coming of age ceremony of warriors. This dance, also referred to as aigus, or “the jumping dance” by non-Maasai. (both adumu and aigus are Maa verbs meaning "to jump" with adumu meaning "To jump up and down in a dance"[4]) has made Maasai warriors known for, and often photographed during, this competitive jumping. A circle is formed by the warriors, and one or two at a time will enter the center to begin jumping while maintaining a narrow posture, never letting their heels touch the ground. Members of the group may raise the pitch of their voices based on the height of the jump.[5]

Umteyo (Shaking Dance)Performed by Amakwenkwe (young men under the age of about 20 or 21) of the Xhosa, the Umteyo (Shaking Dance) involves the rapid undulation or shaking of the thorax so that the whole length of the spine appears to be rippling. Older men, Amadoda, so a similar dance, Xhensa accompanied by singing and clapping while dancers draw their breath in and out through a relaxed larynx, producing a kind of guttural roar.[24]

Mohobelo (Striding Dance)The Mohobelo "striding dance" of the Sotho features striding, leaping, and in some cases, sliding, and almost slithering along the ground. Two and sometimes three main movements occur: the slow Bahobela featuring high kicks, the swifter Molapo with leaping and twisting in the air, and the often left out Phethola letsoho which involves hand movements.[25]